As has been the case for a while, it’s been a minute. I’m working on updating more frequently for all of my dedicated follower (not a typo, just being self-deprecating, lol It’s out of my system now tho I’m good now lol).

So I had this whole post prepared about how my boys were sharing a room for a while and how it was going okay, and then recently we had to move the little one back into our room because he was waking the bigger one up and it was exacerbating his terrible two-ness.

Since we made the switch, Vinny’s behavior has gone from worst to just your average everyday 2-year-old. Which is still a little bit scary, but a hop, skip, and a quantum leap above how he was with fragmented sleep.

So basically what I’m telling you is, if you can, keep your infant in your room for as long as possible if you want a reasonable toddler/small kid. Invest in a bassinet that holds up to 30 pounds or get a nice pack n play and try rooming them together once they fall asleep and wake up at the same time for a while.

But, since it’s already written, I’ll include my post about how we made the transition and how we made it work for the short time that we did. Hopefully there’s something in here that might help someone!

Shortly after Mikey turned 4 months old, he moved into his big brother’s room. For some reason it was harder for me to let go this time, but I couldn’t pretend he wasn’t exceeding the weight limit of his bassinet for much longer…

The transition went fairly well. We decided to try sneaking the little one into the bedroom after the big one was asleep, and that seemed to work just fine. Vinny would either stir and fall back asleep, or not wake up at all, and Mikey is a pretty solid sleeper when he’s out for the night. It seemed to go off without a hitch…at first.

Most of the time Mikey will wake up between 5 and 6 to drink 8 ounces of formula. Usually either my husband or I will be able to sneak into the room, pluck the little one out of his crib, and take him to our room for a diaper change and feeding, and put him back into his crib for a couple more hours of sleep.

However, I don’t know if there is some sort of regression that happens around 7 months but lately he’s been waking at 2am for a feeding, as well as his usual early morning-cap. I guess we lucked out with the four month regression, so he’s just making up for lost time.

Now I had had read somewhere that if you have a toddler and a baby that you should put the baby to bed first so that the toddler doesn’t feel jealous. We all know that babies under 6 months (and some babies regardless of age) don’t give a bother about bedtimes. So in the beginning, to get Vinny to go to bed we would just pretend Mikey was going to bed as well and place him in his bassinet in our room.

However, since Mikey no longer fits in his bassinet, and he doesn’t fall asleep for the night until after a 10pm feeding, we don’t really have that option anymore. I suppose we could have pretended that Mikey is still going to bed in our room at the same time, but I didn’t have this thought until editing this just now so oh well.

But it really hasn’t been too hard to get Vinny to go to bed first anyway. He gets the room to himself for a while and he can play quietly with his stuffed animals without a little brother to try to yoink them away until he falls asleep.

I can’t promise that it will work that way for every toddler, but for us it’s been working fairly well.

(Editing note: Very recently Vinny has been having a little sleep trouble, night terrors and difficulty falling asleep, but we’re trying to troubleshoot…more on that later)

Now, for the room setup, I completely spaced taking any before pictures. #fail So I don’t have any basis for comparison, but the crib used to be where the bed is now, and there was a changing table that we recently got rid of where the crib is now, if that helps.

I really wanted to put Vinny in a toddler bed, and I found some frames for relatively cheap and in good condition on Facebook Marketplace. But, my Dad’s friend had sold us a great set of bunkbeds for dirt cheap and we had them in the garage, so after a long drawn-out debate, we ended up just using what we already had.

Getting Vinny to sleep in the bed didn’t take too much time. We got him used to sleeping in it for a  week before we moved Mikey in. We had kept a guard on the side of the bed for a month or two before taking it down, and he now sleeps in a twin-sized bed on his own!

We use the top bunk for storage right now until we figure out how to get a little more organized. In the meantime, it makes a “cute” display for his animals.

We ended up moving most of the toys into the closet for the time being, as I was worried about Vinny throwing toys into the crib to become smother risks for Mikey. We do have a table and chairs for him, with some cardboard books for him to look through for quiet times and if he wakes up before everyone else. 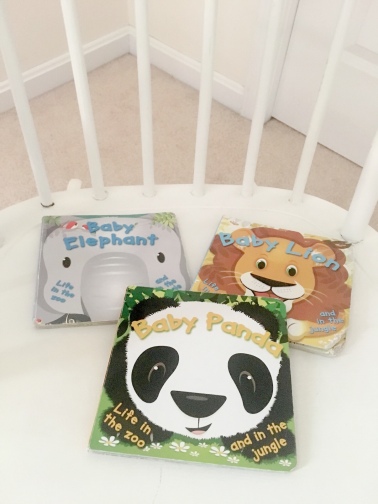 We have an old baby monitor system under Mikey’s crib so we can hear him when he starts to fuss, so that we can retrieve him before he gets too loud and wakes Vinny up.

We also have a Wansview camera system to keep an eye on them. We got it for $30 on Mercari! It links up to an app on our phones so we can check on them without having to open the door and risk waking one of them up if they’re napping! We can also talk to them through the camera.

The camera works just fine, but at night it looks a little creepy, because the sensors look like little red eyes in the dark. We’ve tried a few different placements for it so that it doesn’t scare either of them.

So that’s how it’s been working for us so far. Hopefully we can move them back in together in a few more months. I’ll keep you posted!

How many of you Mamas have little ones sharing a room already? Anyone have any other tips? Let us know in the comments!

Thanks for reading, my gals! 😘😘

👀If you’re new here, and this content or any of my upcoming content interests you, make sure you add your email and follow so you don’t miss any updates! 😁😁 And if you’re already following, thank you and bless your heart and soul! 🙏🏼🥰🤗

📋 Upcoming Content: Battling Body Dysmorphia As A Mom, Getting Ready For The Holidays, Two 2 And Under, and Navigating Social Anxiety At The Playground